DYSTOPIAN GIRLS SERIES
6 books available on Amazon.  More coming soon.
Dystopian Girls is a harem adventure style novel written for adult readers. This book has sexual content, profanity and violence.
Mason, a good guy in a post-apocalyptic world tries hard to cling to his values despite the new dystopian society. In a world where most survivors are female, and healthy males are rare, he overcomes his timid personality to draw the most attractive and powerful women to his side.
Sexually charged and action packed, Dystopian Girls is an adult oriented novel that puts you in the mind of a respectable young man determined to make the best of a bad situation. When reality begins to match up with fantasy he needs to carefully navigate his journey to keep everyone alive and happy, including himself.

ISLAND GIRLS SERIES
Complete series of 3 books available on Amazon.
Joah Maroon, an ex-military, club bouncer passes out in a Mexican hospital, then wakes up on a paradise island surrounded by beautiful women. Despite this apparent turn of luck, he is a prisoner. And part time circus monkey.
Forced to compete in deadly games and entertain unseen viewers, Joah plots escape as he draws his new female friends closer. The tropical island home is deceptively enticing but unforgiving. As his world changes, new reality alters his motivation. He must escape his one of a kind prison, but not alone.
Island Girls is a new harem adventure novel by Rodzil LaBraun. This book is intended for MATURE READERS ONLY, due to profanity, violence and sexually explicit scenes. 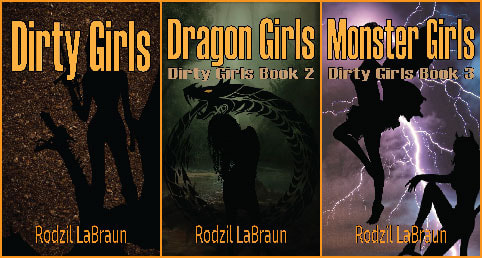 NEW EARTH SERIES
Complete series of 3 books available on Amazon.
Earth is destroyed. Mankind's existence is questionable. A handful of ships launched for the nearest habitable planet is the only hope. Generations come and go during the long journey. Finally, with departure imminent, a series of revelations shocks the crew and creates disunity. Their entire existence had been a lie.
An optimistic young man named Lincoln steps up to help lead his people through the perils of this new world as everything that they thought they had known about life is turned upside down.
"Arrive" is the first book in the New Earth series that will lead readers through surprises and delights as mankind must start all over again in harsh and unpredictable environments.
SIGN UP for BiWeekly Newsletter!
Private: Your email address and information is NEVER shared with anyone else.
Respectful: You'll only receive 1 email from us every two weeks, MAXIMUM.
Contact Rodzil LaBraun by email at rodzillabraun@gmail.com